It’s been a busy few weeks with all kind of gigs all over the place and a few other things happening but the main thing I’d like to talk about in this blog is my TV work.

First let me just quickly keep you up to date with where I’ve been and what I’ve been up to. There have been cabaret shows in Blackpool, Rhyl, Bridlington, Clacton on Sea and Grange over Sands; close-up magic in Bedford and a few days performing shows and close-up magic at Crich Tramway Village. To be honest I’d never heard of that last place before but it was a beautiful picturesque place to work and if you’re ever looking for a family day out in Derbyshire I’d definitely recommend it.

I also did a show at the Theatre Royal in Wakefield alongside comedy legend Jimmy Cricket! It was a packed show with singers, comedy acts, gymnasts, jugglers and a Britain’s Got Talent finalist. I had the privilege of being on directly before Jimmy, who was obviously headlining. Backstage he lived up to his reputation as one of the nicest people in showbiz and was happy to chat about how he started out and all his experiences over 50 years of show business, from being a holiday park ‘coat’ entertainer to having his own TV shows. 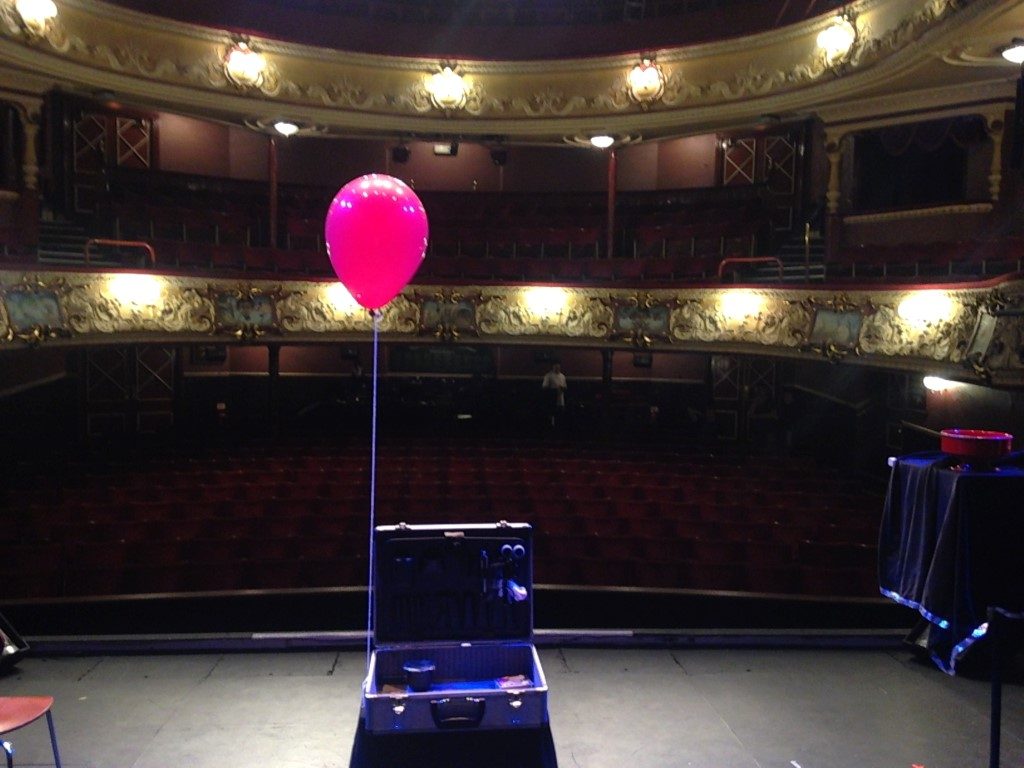 Which brings us nicely round to what I wanted to talk about: TV work. Now I’ve not had my own TV show but I have spent quite a bit of time in front of the camera, occasionally with magic related stuff but mostly as an extra or with occasional small parts in the soaps. I was thinking about it because I hadn’t done anything on telly for a long while until a few weeks ago when I was asked to be an extra for daytime BBC programme Moving On. Now, being an extra mostly involves sitting around doing nothing for hours on end before being asked to walk from one place to another, or sit somewhere and move your mouth at someone else who’s sat there occasionally moving theirs. It’s the easiest job in the world but also pretty mind-numbing. If you are lucky you’ll be with a chatty, fun bunch of people who make the day go quickly (as I was on this occasion) but after a few hours people can run out of energy, get bored and things can get quiet and begin to drag. I rarely have the time to do extra work these days but it came up last minute and I figured I could make a few quid and still do my office jobs on the laptop.

I started doing TV stuff in 2002, about the same time as I went professional with the magic, and I have had a few highlights in that time. I played Andy’s sell mate in Emmerdale, played an architect in Coronation St (I had three words to say and they sent me the entire script and treated me like a star for the day) and a photographer in Hollyoaks. I’ve also worked with Peter Kay on Channel 4’s Max and Paddy (look out for me in the first episode fighting with sailors) and did some juggling and fire eating on his talent show spoof Britain’s Got The Pop Factor. Some of the lowlights include doing a ‘hunk in trunks’ competition for Hollyoaks where I paraded around in my boxers before pretending to feel up one of the Hollyoaks girls. It was pretty embarrassing. Another bad day was one of the late night Hollyoaks episodes where I attended Darren’s stag do and I had to spend the day in a strip club having lap-dances and getting paid for it. It was a terrible day’s work… honest.

I quite often end up doing magic tricks for the other extras, or occasionally the cast and crew, to kill the time. This has led to me performing at their parties as well as getting hired as a magic consultant on a David Jason project for ITV. It was a challenge as I had to come up with a way to make a snow globe disappear in absolutely impossible conditions. I was quite inexperienced at the time but still managed to come up with something and got to work with an actor I’d loved ever since first watching Only Fools and Horses. I was also booked as a hand double for Eli Dingle on Emmerdale when he had to do some fancy stuff with cards. I’d done quite a lot of work on Emmerdale before but this time I was waited on hand and foot and got to hang out in the actor’s green room which was like a small luxury flat with everything you could possibly want. One of the stars was doing an interview for a magazine while I was there and was asked how she got her hair to be so shiny. She answered that she washed it every other day in a mix of egg yolks and coconut milk. She later confessed to me that she’d just made this up so that people would read it and copy her fictional hair regime!

Other TV appearances have included doing magic for some British Olympic athletes on The One Show, performing magic and knife juggling on Don’t Tell the Bride and being a scary juggling clown in The 4 O’clock Club when I had to have my entire head painted white then have blue fluff glued on. It took ages to get off!

If you work in the film or TV industry and are looking to hire a magician I am still available for TV magic or magic consultancy as well as entertainment for wrap parties and other celebrations. If you don’t work in the film or TV industry but would like to hire a performer who has been trusted by the country’s biggest broadcasters I am available for weddings, parties, corporate events and all kinds of private engagements. Thanks for reading.